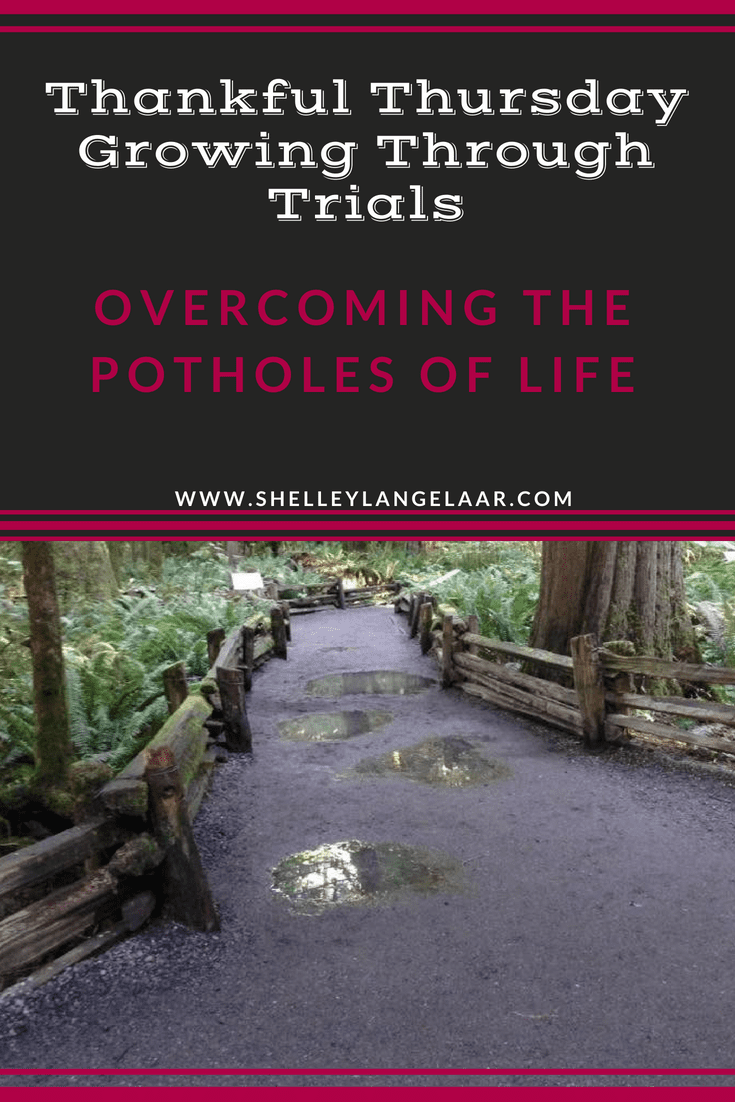 Thankfulness and trials, do they really go together?

As I reflect today on my gratitude I realize that I am grateful for the trials that I have had to endure. To be honest, when I am in the middle of the trial, I may not always connect to being grateful.

Trials in my Life

If you are a breathing human being you will not be immune to difficulties in your life.  They are not like the pot holes that you notice and can swerve to avoid. No, some difficulties are more like huge craters that if you don’t pay attention, can swallow you up and do damage to your well-being. Much like a pothole can do to your car. 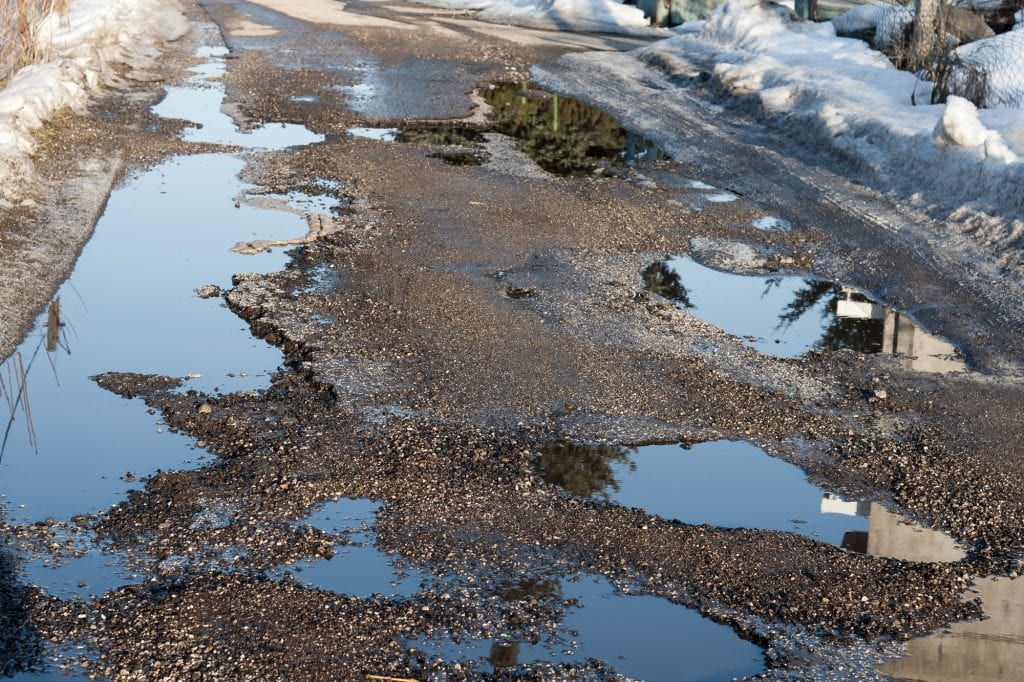 For the past several years my husband and I have both been experiencing health issues.  They have put a strain at times on our marriage and also on each of us personally.  It has been a challenge at times to see any good in these trials and I have responded at times with a temper tantrum — not a pretty sight. Thankfully, my temper tantrums are few and far between and they don’t last very long. Thankfully my husband is able to understand and he helps me to refocus so that I can continue to press forward.

Years and Not Days

There are many trials that will last maybe a day or two. Often a trial can last a week or several weeks. One of our trials has lasted years and it continues to try and trip us up. Some days we lose the battle and fall into the crater of anger, frustration, worry, fear, dispare, anxiety, self-pity and defeat. When that happens we eventually bond together and help each other out of the pit.

Several years ago my husband became very sick. We were on vacation and he felt weak. He wasn’t acting like himself and I knew that something was very wrong.  We attended a medical clinic and he was told that it was a bladder infection and that he would feel better in a few days. He got a prescription for some antibiotics and we continued on with our holiday. Unfortunately he was not better in a few days and was actually quite worse. As soon as we got back to our city we went to the ER. He ended up staying in the hospital for over 2 1/2 months. As you can guess — this was not a bladder infection.

My husband has no feeling in his left leg and he had developed a wound in his hip area. He thought he was taking good care of it, however it got severely infected. In fact, he became septic. Yikes! The thing is, he didn’t realize how bad it was because he couldn’t feel it. He was admitted to the hospital and went through several tests. His infection was so bad that they had to attach a machine on him that literally would suck the infection out. During this time we started to notice a bulge on his neck. 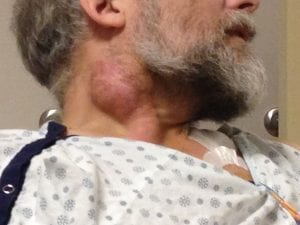 The bulge on his neck was a result of a shunt that drains his cerebrospinal fluid to his abdomen. If you want more information on this you can click here. This shunt is one that he had since a child and it needed to be replaced. He was transferred to another hospital in a different city to have this operation. We both have now had a few temper tantrums and we both have had to encourage each other out of the pit of self-pity. 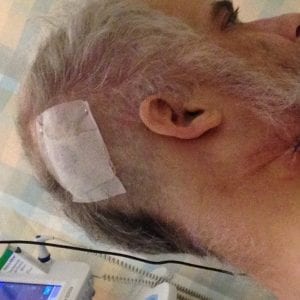 His shunt operation was successful and he appeared to be doing better, or so we thought. Within a few days he had to have another operation as he had a bowel obstruction due to his surgery from his shunt. Does this ever end? —- not yet.

We were sitting in his hospital room one evening and we both were in tears. It was a feeling of defeat and exhaustion that overcame us both.  I was trying to put on a brave face and be positive as I was wanting to be supportive. We talked about being “done” and we prayed together before I left him for the night.

I had a restless sleep that night and I had this inclination that something was not right.  Shortly before 5:00 am I received a phone call.  My heart was beating fast as I answered and my inclination was right. The nurse called to inform me that my husband was taken down for immediate surgery in regards to his bowel obstruction — once again. I don’t even think I cried that morning as my tears seemed to be all dried up.

I went to the hospital that afternoon and he was recovering from surgery in his room. He gave me a sheepish smile and I sat down beside his bedside. My first words were — “I guess we are not done”. We both laughed and talked about continuing to press forward. 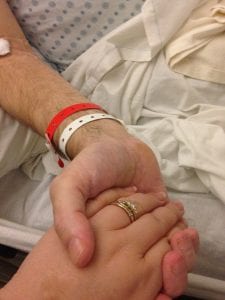 Christmas was fast approaching and it looked like we would be spending it in his hospital room. I was at work on the 24th and was trying to keep my emotions in check as once again I felt defeated. My co-worker asked if she could pray for us and of course I agreed to it.

I had 45 minutes left of my shift and was planning on going to the hospital when my cell phone dinged. It was my husband informing me that he was being discharged and would take a cab home and meet me in the lobby of our condo.  An answer to prayer. Both my co-worker and I had tears of joy as I shared the news with her. There were many times throughout the past few months that I had to fight the thought that — he would never be returning home. 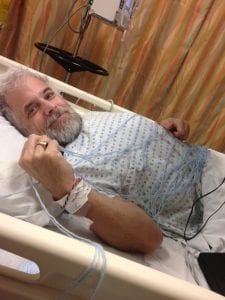 It would be great to say that my husband is healed and all is tickety boo. That is not the case, he continues to deal with health issues that stem from that 2 1/2 month hospital stint over two years ago. The infection deteriorated his hip and he has no hip bone left. He continues to deal with this infection and has been on IV antibiotics and now oral ones. The multiple surgeries in his abdomen area has given him a hernia that they don’t want to try and fix at this point. He still has to care for his wound daily.

Strength In and Throughout the Trials

Recently I had a friend ask me how we coped. The only response that I could think of was — our faith. We couldn’t of done it (or continue to do it) without God. He continues to give us strength and hope. We both have grown so much through this experience. I have had to really lean into God and seek His comfort and peace. It has given me courage and perseverance. I have a greater capacity to respond in empahy and understanding to others. Whether I like it or not, it has even honed patience within me.

I have also gleaned so much from my husband and his reactions to these trials. He is a fighter and is full of tenacity. Although his stubbornness can be a bone of contention at times, it also has been an asset. He has an attitude of positivity and a determination to never give up. Every day he wakes up and presses forward. He works full time and is looking after his medical needs as best as he can. In addition he makes an effort to call me “beautiful” everyday and to reach out with love and kindness. 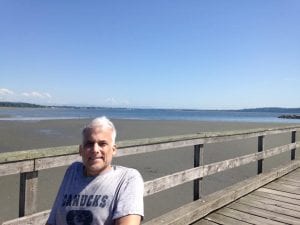 We have had to really work on our marriage and our relationship with each other. Trials have a tendency to destroy a relationship. Fear and stress can cause breaks that are hard to repair.  It’s not always easy, and we both have had moments of wanting to give up — however, we  both refuse to let the enemy win. I guess you could say, we are both a little bit stubborn —  which is sometimes a good thing.

Through this set of medical trials it has caused me to develop an even deeper relationship with God. It has encouraged me to seek His face first and foremost. I have developed greater wisdom in regards to responding to adversity (now if only I would always use it — yikes!). I now trust that God is going to see me through anything that comes my way. The trials have allowed me to grow in maturity and grace. Today, I can say with assurance — I am thankful for the growth that has occurred in my life through the trials that I have had to face.

Growing in faith is an action. There is no magic wand or magic potion or wishful thinking. I wrote a post  on how I grow my faith — click here if your interested in growing yours.

What is God’s Word Saying To Me Today? 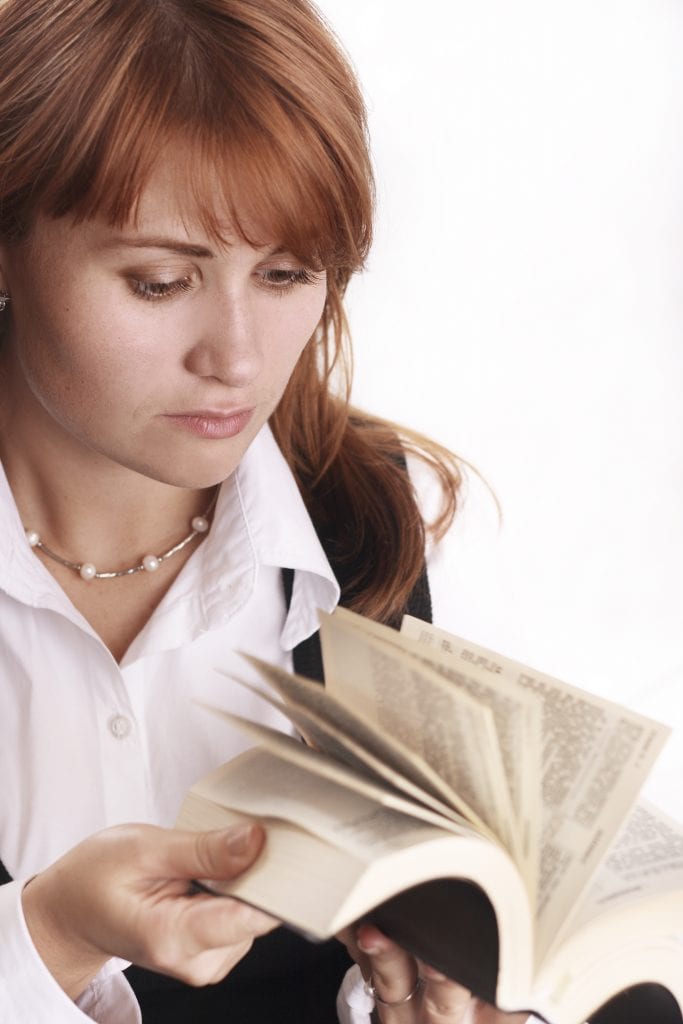 ” My brothers and sisters, when you have many kinds of troubles, you should be full of joy, because you know that troubles test your faith, and this will give you patience. Let your patience show itself perfectly in what you do. Then you will be perfect and complete and will have everything that You need.”  — James 1:1-4

” Not only so, but we also glory in our sufferings, because we know that suffering produces perseverance; perseverance character; and character, hope.” — Romans 5:3-4 AMP

“Therefore, among God’s churches we boast about your perseverance and faith in all the persecutions and trials that you are enduring”.   — 2 Thessalonians 1:4 NIV

“And we know that in all things God works for the good of those who love him, who have been called according to his purpose.” — Romans 8:28

How do you usually respond to life’s difficulties?  How can you find joy in your troubles?

I would love to hear from you. 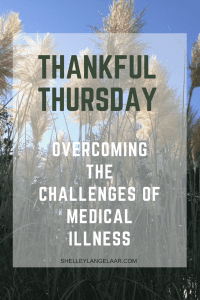 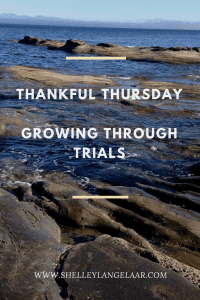 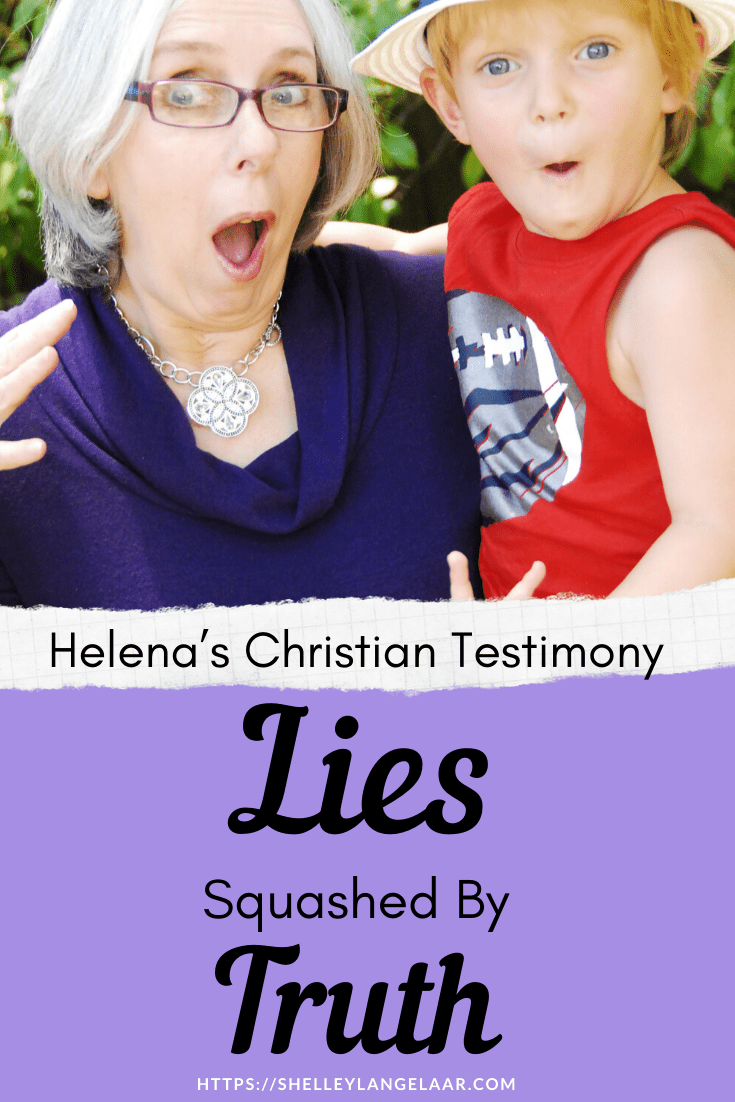 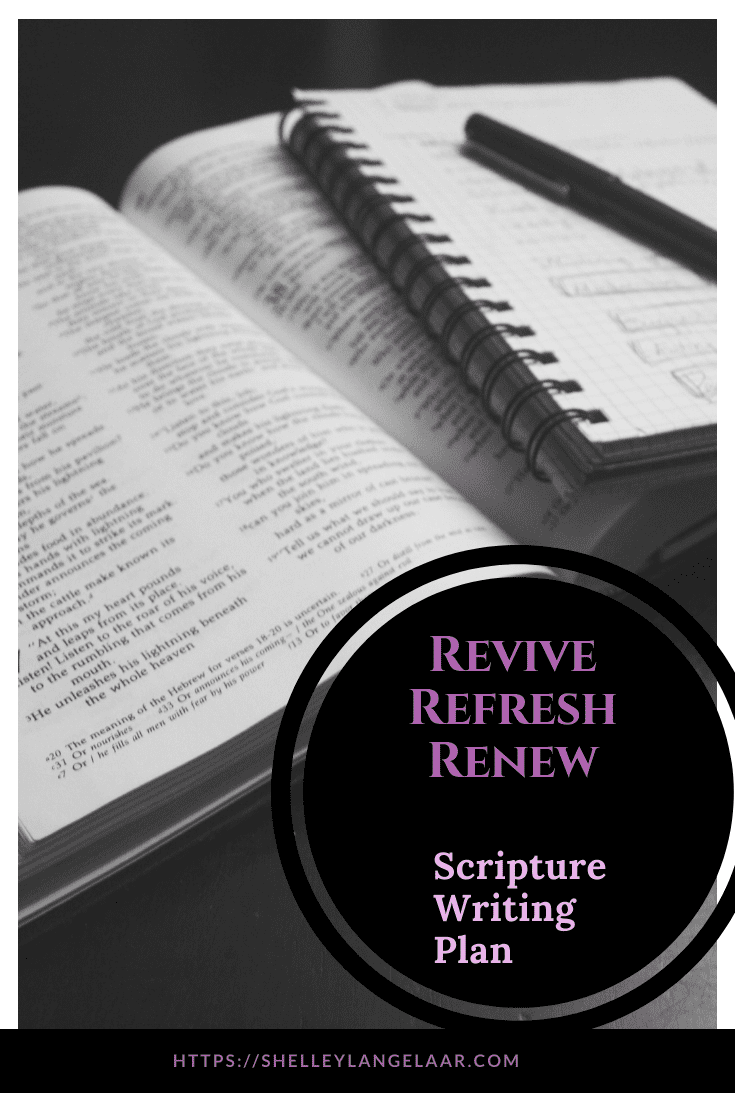 Hello friend I am amazed at how fast this past year has gone by. So 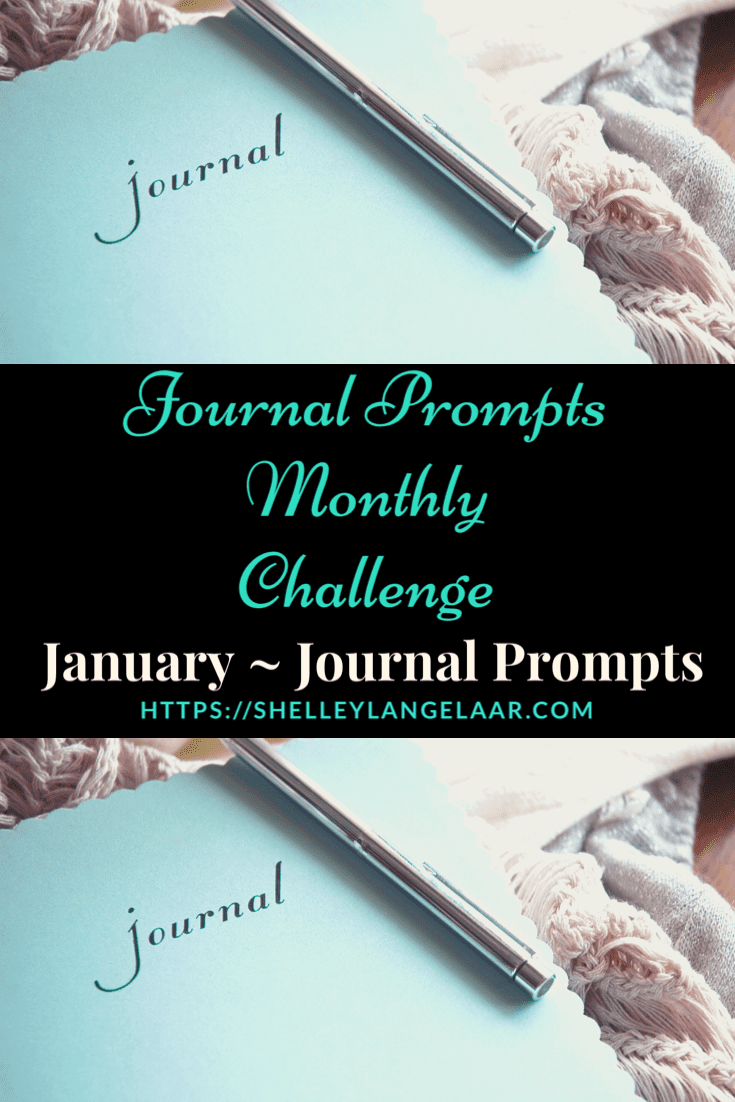 Hello friend Have you ever heard of a journal challenge? Journaling has so many different

15 thoughts on “Thankful Thursday ~ Growing Through Trials and Difficulties” 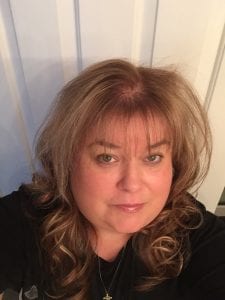